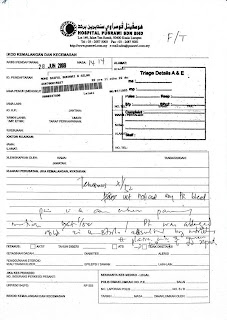 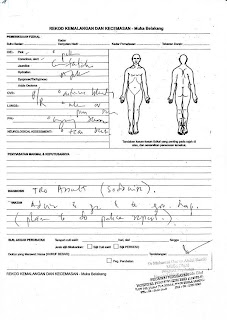 The attempt to smear and defame Anwar Ibrahim has been thoroughly rejected by the international community.

Statements condemning the arrest of Anwar Ibrahim and stating concerns over the credible dispensation of justice have been made by groups which view they entire conduct of this case as suspiciously, similar to the fraudulent allegations made in 1998.

International Crisis GroupThe International Crisis Group condemns the arrest of our Board member, Anwar Ibrahim, former Deputy Prime Minister of Malaysia. Anwar Ibrahim was arrested outside his home in Kuala Lumpur on 16 July 2008 on charges that are obviously politically motivated, relating to his position as an opposition leader. Though released on bail the following day, the allegations against him remain and are clearly a deliberate attempt to smear him. We call on the Malaysian government to drop the charges against Anwar Ibrahim and for its leaders not to improperly use the police and judiciary for their partisan purposes.Signatories include Gareth Evans, Ambassador Thomas R Pickering, and Lord Patten of Barnes[read entire statement]

AccountAbilityAccountAbility’s Chief Executive, Simon Zadek: “We are seeing declines in almost every international indicator of good governance and citizens’ confidence in the democratic process. Malaysia has a unique opportunity to lead the way, in Asia and globally, in demonstrating how complex societies should manage their affairs”…
AccountAbility asks that the Malaysian Government provide exemplary global leadership at this pivotal moment in the nation’s history - by advancing the principles and practice of good governance and accountability advocated by our Honorary President, Anwar Ibrahim and so many other global leaders.[read entire statement]

Senator Joe Biden“A decade ago, the spectacle of Mr. Anwar’s mistreatment and imprisonment on transparently political grounds greatly discredited Malaysia in the eyes of the world community. The action tarnished the reputation of then-Prime Minister Mahathir Muhammad. I certainly hope that the current Prime Minister, Abdullah Badawi, does not repeat the mistakes of the past. I urge him to drop this political attack on a respected opposition figure, and commit himself to rule of law and good governance in Malaysia.”[read entire statement]

National Democratic Institute and International Republication Institute“The arrest of political leader Datuk Seri Anwar Ibrahim on July 16 is of great concern to us and the international community. A similar charge that was filed against him 10 years ago was ultimately overturned by the Supreme Court. The timing of the current charge is of particular concern given his re-emergence on the national political scene since the ban on his involvement in politics expired in April 2008. We hope that the investigation into the allegation is not used as a political tool to silence an outspoken government critic. It is essential that the investigation is conducted in a transparent and fair manner that upholds the rule of law, and affords Mr. Ibrahim full protection of his legal rights. We also urge the citizens of Malaysia to remain calm and pursue resolution of their concerns over his arrest in a peaceful manner.”
Di Laporkan Oleh AJAI- Admin No comments: 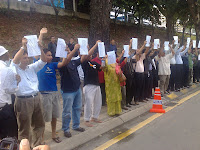 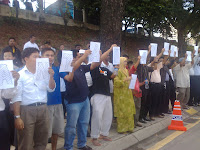 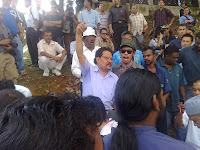 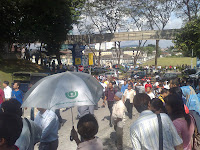 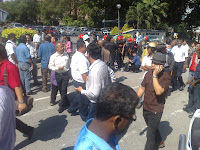 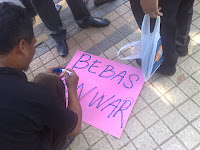 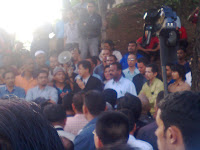 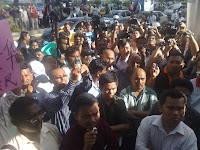 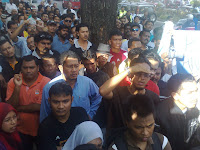 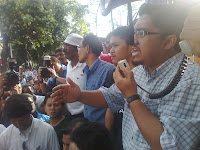 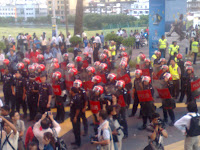 Ezam: The Story of Lu Bu in Romance of the Three Kingdom-Part 1

Ajai tengok Ezam: The Story of Lu Bu in Romance of the Three Kingdom-Part 1 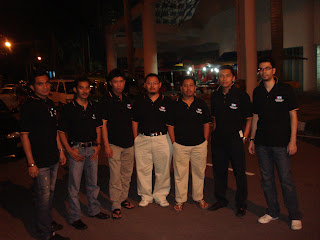 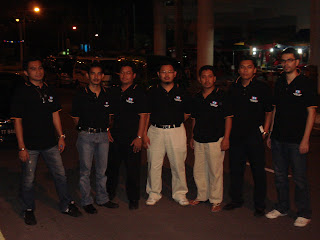 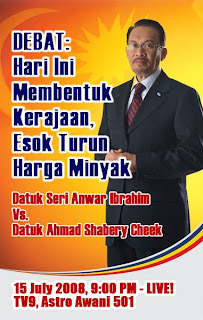 Kinabatangan MP: Yes, I did it but...

Bung Mokhtar Radin (Kinabatangan-BN) today did a U-turn, admitting that he had made an obscene gesture in the Dewan Rakyat yesterday during a dispute with some Pakatan Rakyat MPs.

MCPXYes, I did it, but it (the gesture) is not what it means. Everybody has their own perception and it is not rude and it is not what people think it is,” he said when met in the Parliament lobby. He seemed unfazed by the prospect of any action against him, saying he had not done anything wrong.

The obscene gesture was aired during the 30-minute daily ‘live’ telecast of the Question session on RTM1, but went unnoticed in the chambers because the in-house cameras were not focused on him.Yesterday, Bung Mokhtar had denied making the gesture. He reiterated today that he was reacting angrily to some Pakatan MPs who had called him bodoh (stupid). When asked who had made the remark, he said he was uncertain but “it was one of the PKR MPs”.

Malaysiakini learnt that Abdullah Sani Abdul Hamid (PKR-Kuala Langat) was the MP involved - he confirmed this when contacted by telephone today.“I was very angry with him, so I called him bodoh. I also said some other things after that which I don’t remember. It was very noisy in the House when it happened,” Abdullah said. ‘No point complaining’When met in the Parliament lobby, Kamaruddin Jaafar (PAS-Tumpat) said Bung Mokhtar’s explanation should be accepted.“Just accept his explanation and let him be. Let the rakyat judge. They have seen it (the footage) so let them judge the Kinabatangan MP,” he said.Asked if any opposition MP would submit a motion for action to be taken against Bung Mokhtar, he said previous complaints against those who made rude remarks or gestures had been disregarded. “During the last sitting, we made a complaint but no action was taken. So this time, we are not getting our hopes up,” said Kamaruddin.

Minister in Prime Minister’s Department Mohd Nazri Abdul Aziz said MPs can decide if they wanted action to be taken and table a motion.Asked to comment on Bung Mokhtar’s insistence that the gesture was not offensive, Nazri replied: “If he says it is not a rude gesture, does it mean he can do it again?”

The opposition Pakatan Rakyat coalition has planned to move a motion of no-confidence against Prime Minister Abdullah Ahmad Badawi.

MCPXIt is learnt that Opposition Leader Wan Azizah Wan Ismail (PKR-Permatang Pauh) will be giving a notice to debate the issue this afternoon. Under parliamentary rules, a 24-hour notice is required.Azmin Ali (PKR-Gombak), who is PKR whip, said that an announcement on the matter will be made in Parliament “later”. Should the motion is accepted, it is likely to be debated on

Monday when Parliament resumes after the weekend break. The House does not sit on Friday.However, the motion may not see the light of day as the House speaker has powers to reject it on the ground that it is not urgent.

Barisan Nasional backbencher Bung Mokhtar Radin (BN-Kinabatangan) is said to have made an obscene gesture in the Dewan Rakyat today that was caught on the ‘live’ television broadcast - but he denies it.

MCPXThe gesture went unnoticed on the big screen in the Dewan Rakyat itself, because the in-house cameras were not trained on him.However, RTM1 is said to have captured the gesture during the daily 30-minute ‘live’ telecast of the Question session.The commotion started 15 minutes into the telecast, when Entrepreneurial and Cooperative Development Minister Noh Omar was answering a question by Azan Ismail (PKR-Indera Mahkota).Bung Mokhtar (left) ticked off several opposition members including M Gobalakrishnan (PKR-Padang Serai) for complaining to deputy speaker Wan Junaidi Tuanku Jaafar about the unfair allocation of air-time to the opposition during the ‘live’ telecast.

However, Bung Mokhtar told TheSun outside the House that he did not make the gesture, described as the ‘palm hitting a clenched fist’.“No, I did not do that. I just did this (hitting his palm on the back of his other hand). I (was) angry with (Gobalakrishnan). He called me bodoh (stupid). (So), I called him bodoh back. What’s wrong with that?” he asked.“(Gobalakrishnan) called me bodoh when I questioned the speaker. Why should the opposition be given 30 minutes of prime time on television which the government has paid for?”Contacted later, Gobalakrishnan brushed off Bung Mokhtar’s claims.“No, I never called anyone bodoh. I would never make such an unparliamentary remark,” he said, adding that he did not notice the rude gesture. Chong Eng (DAP-Bukit Mertajam) said, however, that her constituents had seen the gesture on television and had called her to complain.Last year, Bung Mokhtar came under fire for his infamous bocor comment to Fong Po Kuan (DAP-Batu Gajah).

PKR de facto leader Anwar Ibrahim today turned to the syariah courts to clear his name on the sodomy allegation made by his former aide, Saiful Bukhari Azlan.
MCPX

Anwar, who was accompanied by his wife and PKR president Dr Wan Azizah Wan Ismail, filed a complaint against Saiful with the Federal Territories Islamic Affairs Department (Jawi).
The complaint, referred to as a qazaf, is to request for a probe into ‘false allegations’ pertaining to adultery or sexual misconduct.

Anwar’s lawyer Kamel Ainiah Kamaruzaman, who was also present, said that under Islamic law, it was incumbent upon the accuser - not the accused - to swear on the Quran. 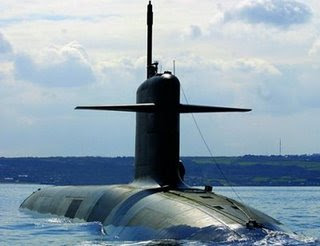