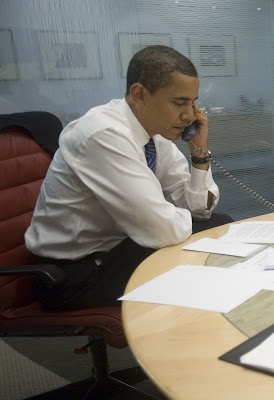 Obama : Hello Najib !!! Why you get Conspires with my enemy? you wanna me bring you to the new hell after alltantuya ? Let answer me ?? Damn it !!

The transaction of North Korea's suspected shipment of weapons to Myanmar, currently being carried on a freighter tracked by the U.S. Navy, was planned to be paid through a bank in Malaysia and the visit by a U.S. envoy to Malaysia this weekend will focus on ways to cut off the payment transaction, Yonhap reported Saturday citing an unnamed "high-level" source.

"Kim Jong-il will have a hard time collecting his money," the high-level source said, speaking strictly on condition of anonymity. The source declined to identify the bank due to diplomatic concerns.

Philip Goldberg, the U.S. coordinator for the implementation of a U.N. Security Council resolution that punishes North Korea for its May 25 nuclear test, is scheduled to arrive in Malaysia on Sunday.

It also comes as North Korea's Kang Nam freighter is apparently returning home after being tracked by a U.S. Navy destroyer that suspects it is carrying cargo banned under the resolution.

The U.N. Resolution 1874, which reinforced sanctions that were imposed after North Korea conducted its first nuclear test in 2006, bans Pyongyang from exporting any type of weapons. It also bans nations from making financial transactions with North Korea.

According to another source in Seoul, the Kang Nam is believed to be carrying small Soviet-era arms such as AK-47 rifles and RPG-7 anti-tank launchers. AK-47s and RPG-7s are two of the most widely traded Soviet-era weapon types that North Korea is capable of producing on its own.

The U.S. believes there are "multiple" North Korean ships used to export weapons